And they happen to be highly complimentary. Pandora to easily consume music you love with it's one click radio format; Midomi to easily search for samples and info on specific songs/artists you know OR identify music you are hearing.

Very different models and visions of the future, but both are making consumers really happy and powered by some incredible technology and entrepreneurs. iPhund?
on 8/09/2009 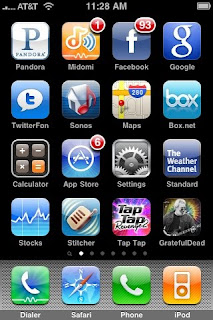 The iPhone is blazing a trail in next generation mobile. It’s that unique combination of ease of use, an ecosystem to empower and benefit 3rd parties, great functionality and clear marketing. The consumer reaction to the iPhone reminds me of the internet in 1997 when “always on, high speed” internet was getting adopted. Usage was and commerce were 3x’ing because the experience “didn’t suck”. It didn’t take an advanced degree to see what broadband’s ultimate penetration would look like. The iPhone and the app store are foretelling the mass market future of mobile. iPhone adoption is exploding at a massive and unprecedented rate of 10s of millions per year in spite of the global economic meltdown. Apple has slightly over a 1% share of the global market at the end of ‘08 (iPhone installed base at 13.7 mm units), Nokia (38% share), Motorola (8% share), RIM , HTC, Samsung, Palm and others are aggressively pursuing this market. Note that RIM’s Blackberry maintains market share leadership over the iPhone under most definitions of the smart phone market; however, from a mobile Internet or app usage perspective Apple is way ahead. On a recent trip to Greenwich, CT I learned that the teens there are gravitating to Blackberry’s BBM (a private messaging product for those on the Blackberry network) and keyboard.

So what is the iPhone Effect?
- Consumers can easily find and install 3rd party apps through the coherent app store. Seems like it would have been simple already, but this is the first time it's just easy. Early attempts to replicate it have been very problematic. Just ask Nokia about the challenges of their Ovi Store.
- Publishers can bring their wares to market without carrier negotiations (talk about a company killer - dozens of companies have died at the doorstep of carriers waiting for that big deal to close). Getting out of that sales loop is a big deal. Apple takes a 30% cut.
- Carriers get to sell data plans, watch data usage soar and unwind dreams of controlling a mythical walled garden.

This is truly a golden age for mobile innovation. Welcome to one of the great mega-trends for the next major venture cycle.
on 8/09/2009

In a world where you have only have seconds left to identify a song... Midomi Music Identifier and Search. Buy it in the iTunes app store now if you have an iPhone. Ad was done entirely in house right down to voice talent, video and audio. Not at all surprised to learn that Aaron is a hobbyist boxing announcer.
Thanks to Corinne Marcus for the music
on 8/09/2009

Going Mac Mini in Entertainment System. Primary catalyst? Netflix streaming. The library of movies and TV shows (more important to me) on demand is improving. I Secondary catalyst? New Mac Mini is quite the green machine. Apple's claim is only 13 watts per hour on idle and that the "Mac mini the most energy-efficient desktop computer in the world." For a solar home owning, Prius driving guy like me, that really matters. Had been waiting for blu-ray drive but that's not looking like it's coming any time soon and I got tired of waiting. Recos for external blu-ray for a Mac? Would have gone PS3 given it's Blu-Ray drive but it can't easily stream Netflix without an awkward Windows server attached. Using a USB audio dongle to get digital audio out.
on 8/07/2009

Matt Marshall of Venturebeat covers Midomi's recent ascent to #1 and comments on our involvement. Includes a video comparing the speed of the music identification to Shazam, showing Midomi's speed.

Midomi, a mobile application that lets you identify songs by singing into the phone, today became the No. 1 paid music application on the iPhone.

The application boasts several million downloads (the company isn’t specifying exactly how many). It launched the $4.99 application three months ago, and the company.... see full article here 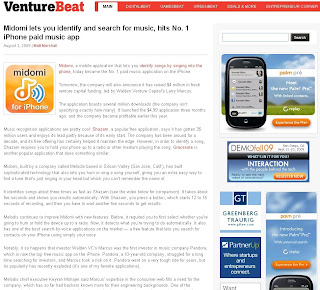 We've been working with the company for a number of months, from before the Midomi app was upgraded and made paid, but the round has now formally closed.

SAN JOSE, California –August 4, 2009 – Pioneering sound search technology and applications innovator MELODIS Corporation, announced that they have raised $4M additional funding in a round led by Walden Venture Capital VII, with participation from a major global device manufacturer. Larry Marcus from Walden Venture Capital has joined the Melodis Board of Directors.

MELODIS’ mission is to make sound and speech the preferred means to search and navigate information on mobile or IP connected devices. “Melodis has established itself as a leading branded mobile application publisher with Midomi Ultra Music Identifier and Search and Melodis Voice Dialer on the iPhone and other devices. Additionally, we have a growing list of licensing relationships with marquis device manufacturers and carriers globally,” said Keyvan Mohajer, Chief Executive Officer of MELODIS Corporation. “We are thrilled to add Walden Venture Capital as a partner and bring Larry Marcus’ deep experience in consumer services and digital media to our team.”

“Melodis Sound2Sound Search Science is a breakthrough technology with a mass market future in empowering applications,” said Larry Marcus. “The unique methodology of Sound2Sound provides breakthroughs in speed and accuracy that can be leveraged across a plethora of applications that would benefit from sound or voice as the starting point for search. The Company’s flagship application, Midomi Ultra is already the top paid music app on iTunes. It targets people who love music, allowing quick identification of a song one hears playing, or enabling rapid search for music people know.” 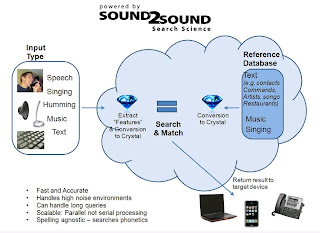 MELODIS is a sound search technology and applications company headquartered in Silicon Valley, California. Its mission is to make sound and speech the preferred means to search and navigate information on mobile or IP connected devices.
MELODIS is the creator of the Sound2Sound™ Search Science, a proprietary methodology that searches sound against sound, bypassing traditional sound to text conversion techniques even when searching text databases. The result is improved accuracy, faster response time and increased scalability. Sound2Sound™ Search Science powers applications including Midomi Ultra Music Identifier and Search and Melodis Voice Dialer. MELODIS has numerous partnerships with global companies including leading device manufacturers and operators that are leveraging the Sound2Sound™ Search Science for their respective platforms. 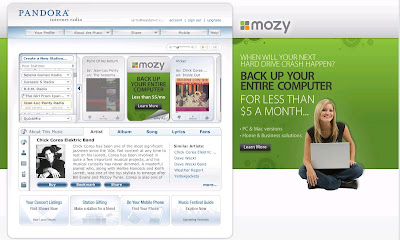 I always feel some joy when I hear an audio ad on Pandora. Just heard this great one for Mozy on Pandora. Pandora is a remarkably captive environment to reach users. I love how it's so uncluttered and sparse from an ad perspective. When an ad plays, it really stands out. Reaching listeners midday with audio has been a challenge, hence the popularity of am/pm drive times. Reminds me a lot of marketwatch.com where the daytime usage made it a core buy. That said, all the mobile and at home listening is spreading usage across dayparts nicely.
on 8/04/2009

Check out the new format of Yahoo here. You can either type in divinecaroline.com or click "+Add" next to "My Favorites" on the left. You'll see DivineCaroline listed in alphabetical order. They will publish the freshest stories each day to this widget on Yahoo! Nice implementation. Give it a shot.
on 8/04/2009